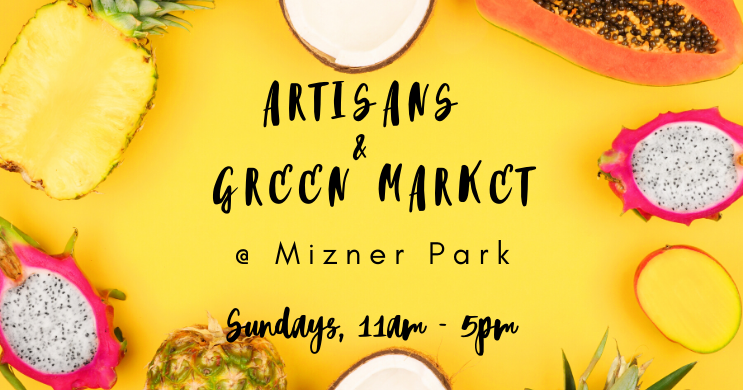 New this year, Mizner Park will host a weekly Artisans & Green Market which will debut this Sunday, February 9, 2020. The Artisans & Green Market will be held every Sunday from 11 am to 5 pm at the South end of Mizner Park. The weekly outdoor market will feature a large produce center with an amazing selection of locally grown fruits, herbs, & vegetables, as well as numerous local vendors offering a wide range of items such as plants, fresh breads, gourmet honeys, skincare products, unique arts & crafts, and more!

This new weekly event is just another fantastic reason to visit Mizner Park and a great way to help support local small businesses. What better way to spend a beautiful Sunday in South Florida?! Mizner Park is located at 327 Plaza Real in Downtown Boca Raton. For more information call 561-362-0606. We at Champagne & Parisi Real Estate look forward to seeing you there! 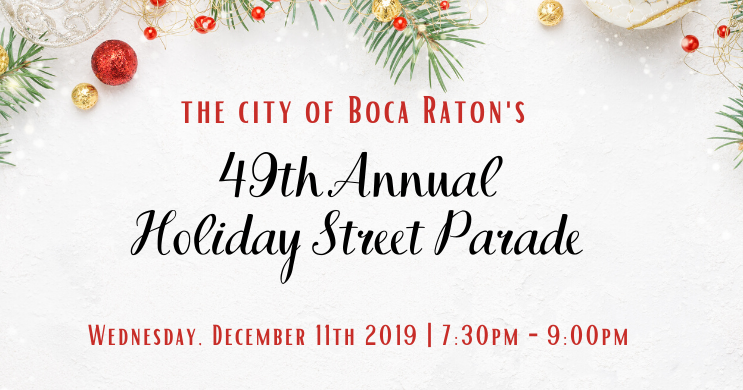 The holiday season is drawing near which means that the City of Boca Raton's annual holiday events & festivities are just around the corner! On Wednesday, December 11, 2019, the City of Boca Raton’s 49th Annual Holiday Street Parade will welcome more than 70 floats and groups to entertain onlookers as they bring dance, lights, and music to Federal Highway in East Boca Raton. Drawing thousands of attendees each year, the annual Boca Raton holiday street parade is one of the most highly anticipated events of the season! Each year the city selects a unique theme for the parade, with this year's theme being “Out of this World!” 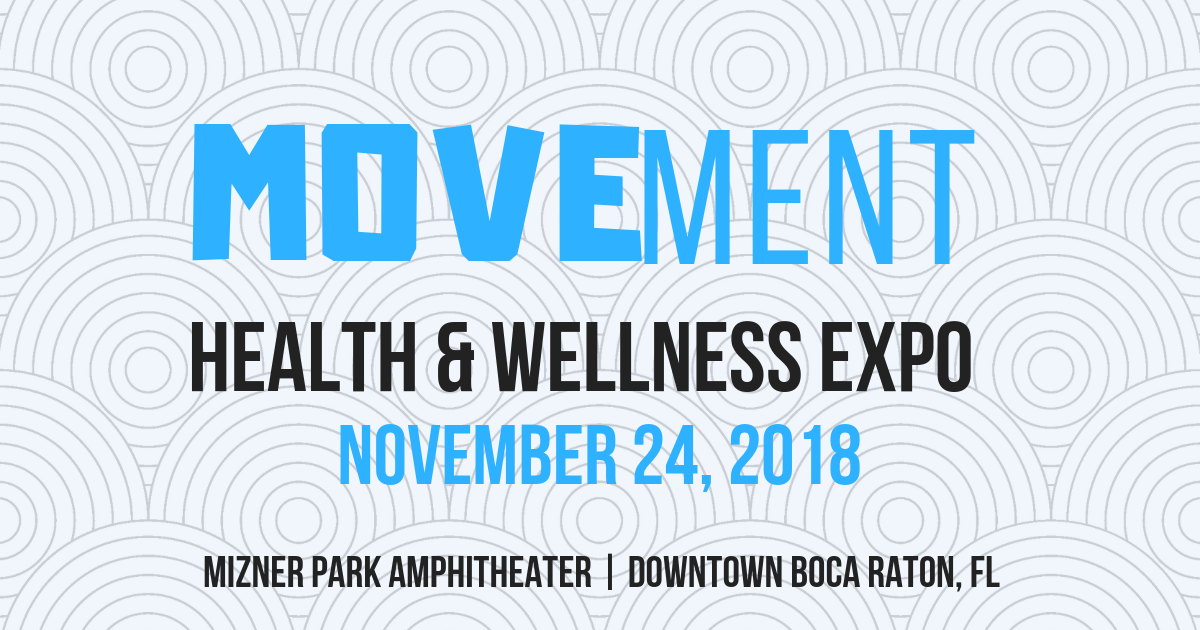 Join us for the inaugural MOVEment Health & Wellness Expo at Mizner Park Amphitheater on Saturday, November 24, 2018. Presented by Wheelhouse Branding, this incredible charity event will benefit the Movember Foundation, the leading charity working to change the face of men’s health on a global level. The Movember Foundation has funded more than 1,200 men’s health projects around the world, addressing some of the largest health issues facing men today including prostate cancer, testicular cancer, mental health, and suicide prevention.

The expo will feature more than 100 exhibitors and tons of great activities happening all day with something for everyone, even the kids! There will be a variety of workshops, classes, demonstrations, vendors, food trucks, a DJ, and more! Attendees can get the day started with Sunrise Yoga in the Park and enjoy additional Yoga classes and demonstrations throughout the day. The expo will also feature the 2018 MOVEment Games, a friendly fitness competition for people of every level of fitness. The cost to register for the MOVEment Games fitness... 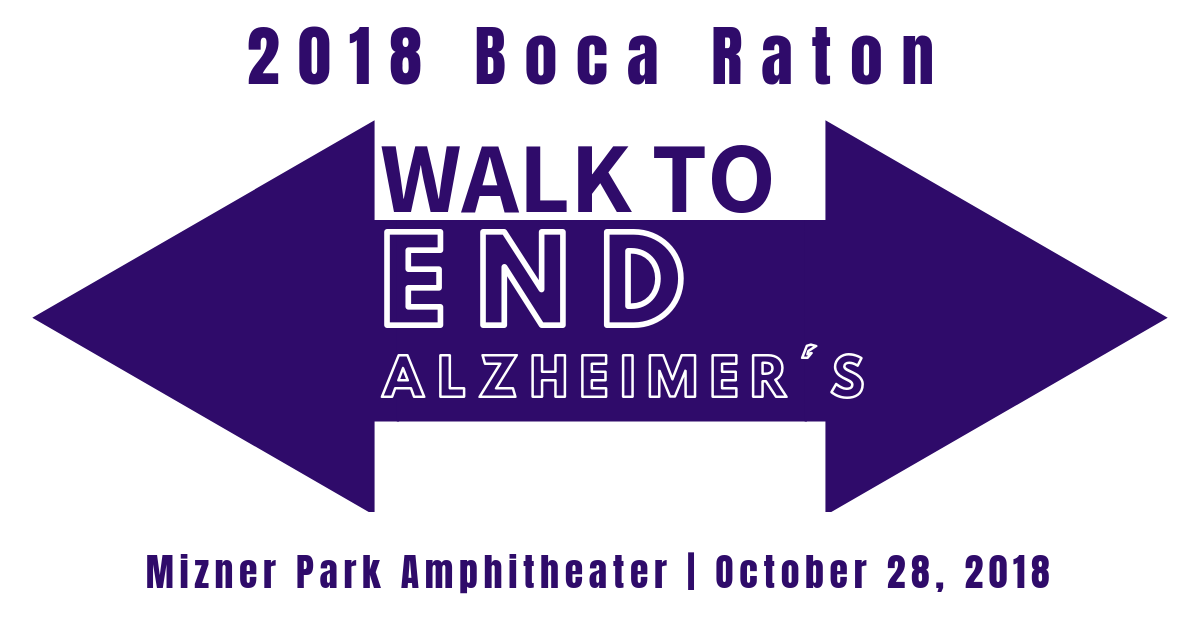 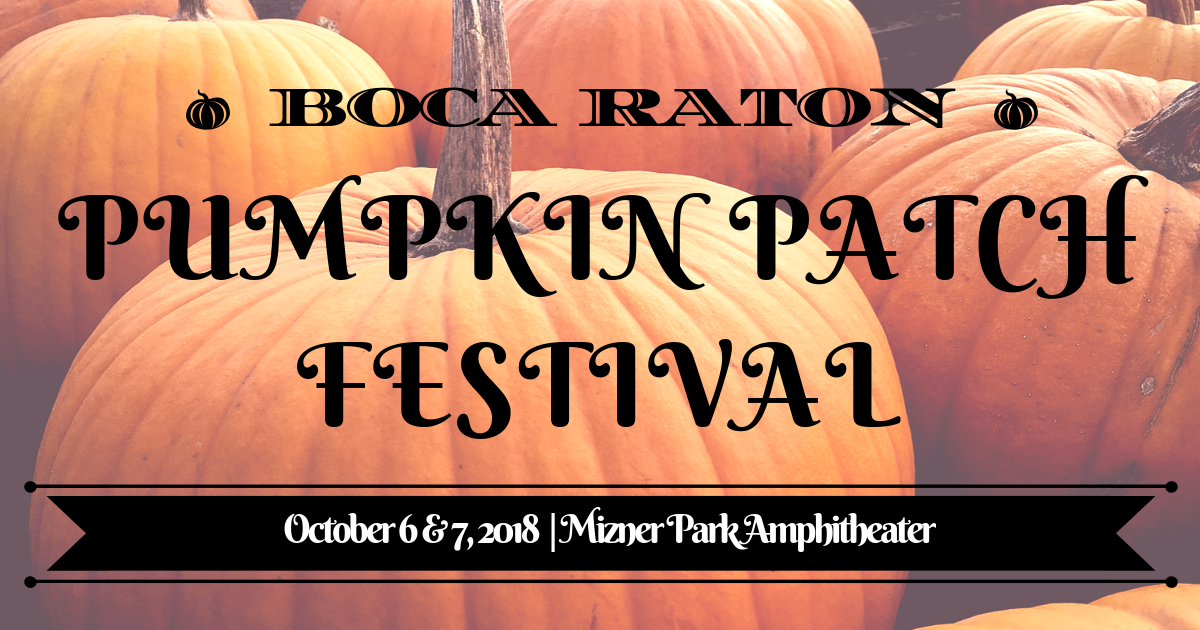 As of September 22, 2018, we have officially said "goodbye Summer and hello Fall",  which for many is the absolute best time of year. When thinking about the Fall season, one of the first things to come to mind, no matter where you live or which season you most prefer, is likely “pumpkins.” From pumpkin carving to pumpkin pie, pumpkin scented candles to pumpkin beer, and the insanely popular pumpkin spice latte that has gained an almost cult-like following, it can be generally agreed that all things “pumpkin” are now synonymous with the Fall season.

As Boca Raton residents, we may not get to experience the crisp, cool air and the changing colors of the leaves that the Fall typically brings, but that doesn’t mean we can’t enjoy all of the great activities and traditions that come with the season-- and yes, that includes pumpkins! On Saturday & Sunday, October 6 & 7, 2018, the Boca Pumpkin Patch Festival returns to Mizner Park Amphitheater, for a two-day, fun-filled Fall celebration! This event will take place from 10 am - 6 pm on both days, offering a full weekend of family-friendly fall festivities!

The main feature of the festival is, of course, the pumpkin patch, where you can select the perfect pumpkin from a huge patch of more than 2,500 pumpkins! The festival will... 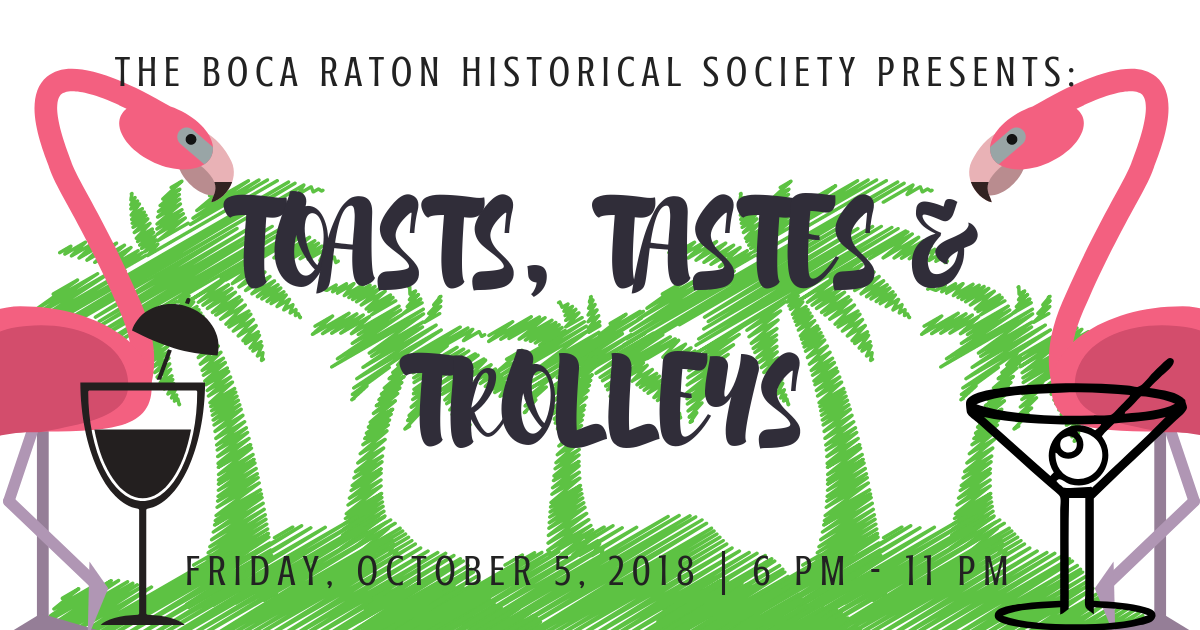 On Friday, October 5, 2018, the Boca Raton Historical Society & Museum’s annual Toasts, Tastes, & Trolleys benefit event returns to Boca Raton for its 7th year. This highly anticipated event promises an extraordinary evening where guests will experience a unique trolley tour of various locations throughout Boca Raton while enjoying dinner by the bite & specialty cocktails at each location.

The event will take place from 6 pm to 11 pm, with the tour beginning and ending at the Boca Raton Resort & Club, where guests will enjoy champagne and hors-d'oeuvres before embarking on the trolley tour. The trolley stops for this year’s tour include several exciting downtown locations including Union Twenty Seven, Loch Bar, Ouzo Bay, Flamingo House with Prosperity... 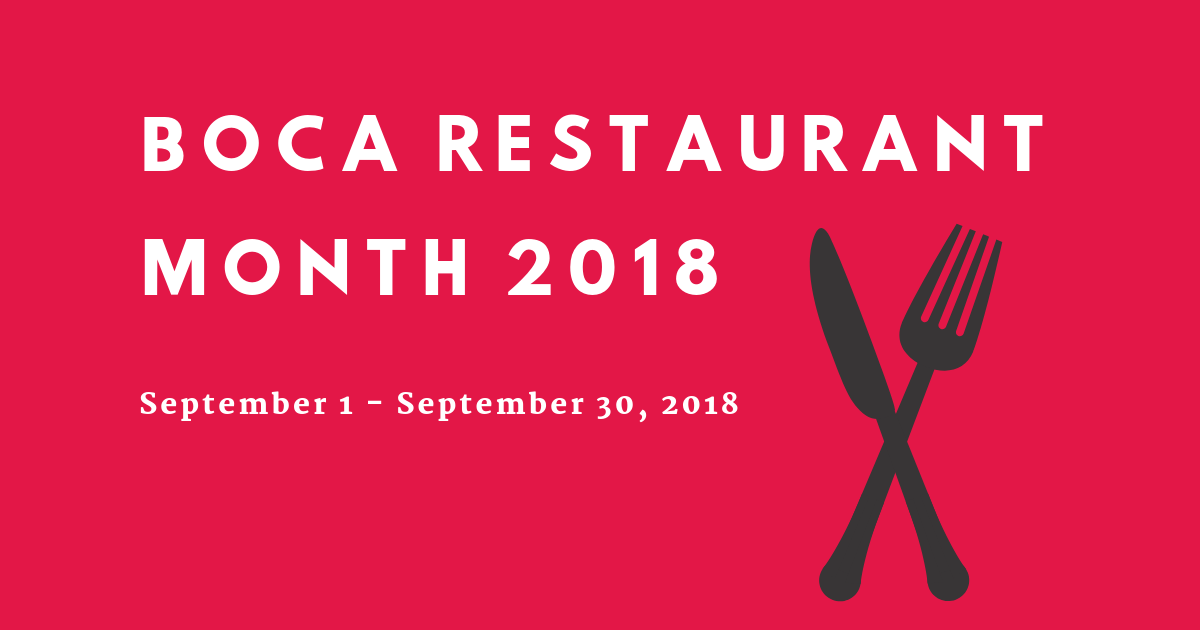 Back by popular demand, Boca Restaurant Month returns for its second year, with yet another incredible month-long restaurant promotion of Boca Raton’s world-class dining scene which will run from September 1st through September 30th, 2018. Boca Restaurant Month offers the public the unique opportunity to indulge in a diverse array of delectable culinary experiences throughout Boca Raton without breaking the bank. More than 30 first-rate dining establishments located in the City of Boca Raton and the Greater Boca Raton area will be serving up mouth-watering three-course meals with a side of exceptional savings, starting from just $21 during lunch and $36 at dinner. Boca Restaurant Month 2018 also happens to fall just before the crowding and craziness of Boca Raton's "season" really hits, making it the perfect time to try a bunch of new restaurants or visit your favorite local spots if long wait times and crowded restaurants aren't really your cup of tea.

The line-up for Boca Restaurant Month 2018 features several returning restaurants from last year's event, as well as a multitude of new restaurants that decided to jump on board. Some of the dining establishments that will be participating this year include: Burton’s Grill & Bar, DaVinci’s Boca Raton, Henry’s, Kee Grill, Louie Bossi’s Boca Raton, Max’s Grille, Oceans 234, Ouzo Bay, Prezzo, Ramen Lab, Tap 42, Temper Grill, The Locale, The Melting... 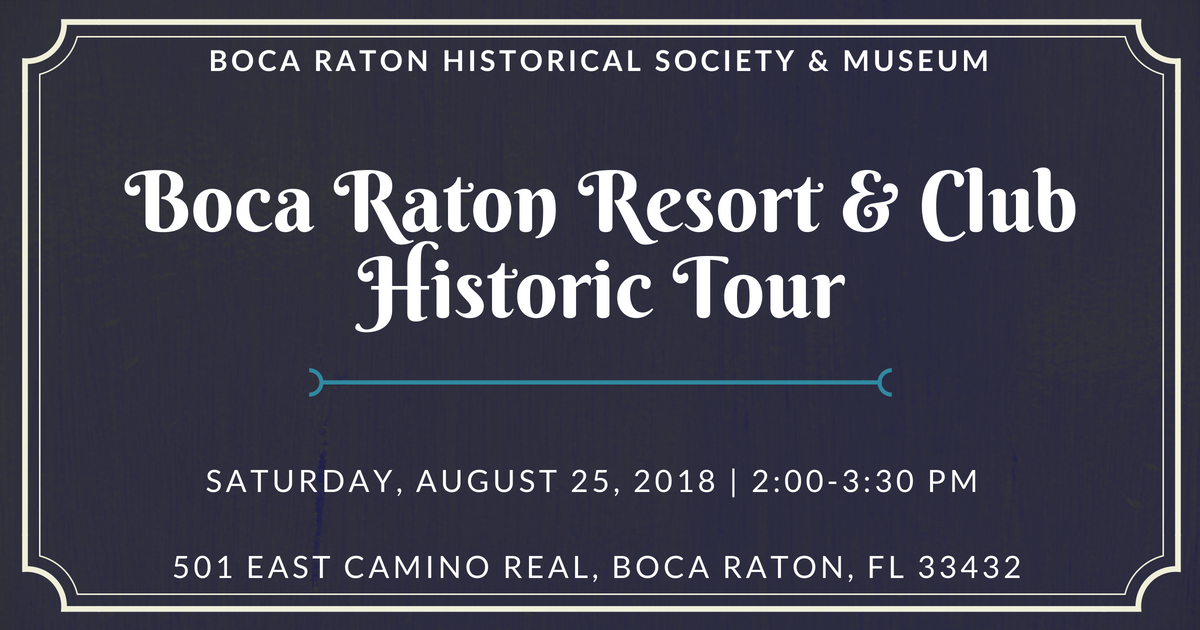 This upcoming Saturday, August 25, 2018, join the Boca Raton Historical Society & Museum for an engaging guided tour of the historic Boca Raton Resort & Club. Originally founded on February 6, 1926, as "The Cloister Inn," the renowned Boca Raton Resort & Club is now one of the most exclusive private membership-based clubs in all of South Florida, boasting a fascinating, colorful past. This 1.5-hour walking tour will take you on a journey through the hotel's rich history, including its past ownership, incredible architecture, historic milestones & turning points, the World War II years, and its prominent role in Boca Raton history.

The tour will take place from 2:00 pm- 3:30 pm at the Boca Raton Resort & Club, located at 501 East Camino Real, Boca Raton, FL 33432. The tour costs $15.00 per person or $10.00 for members of the Boca Raton Historical Society. Reservations are required and must be confirmed by noon on Friday, August 24, 2018. Spots are limited and going fast so be sure to make your reservation ASAP. You may make your reservation online or by calling 561-395-6766 ext. 107. For more information please email tours@bocahistory.org. We at Champagne & Parisi Real Estate hope to see you there! 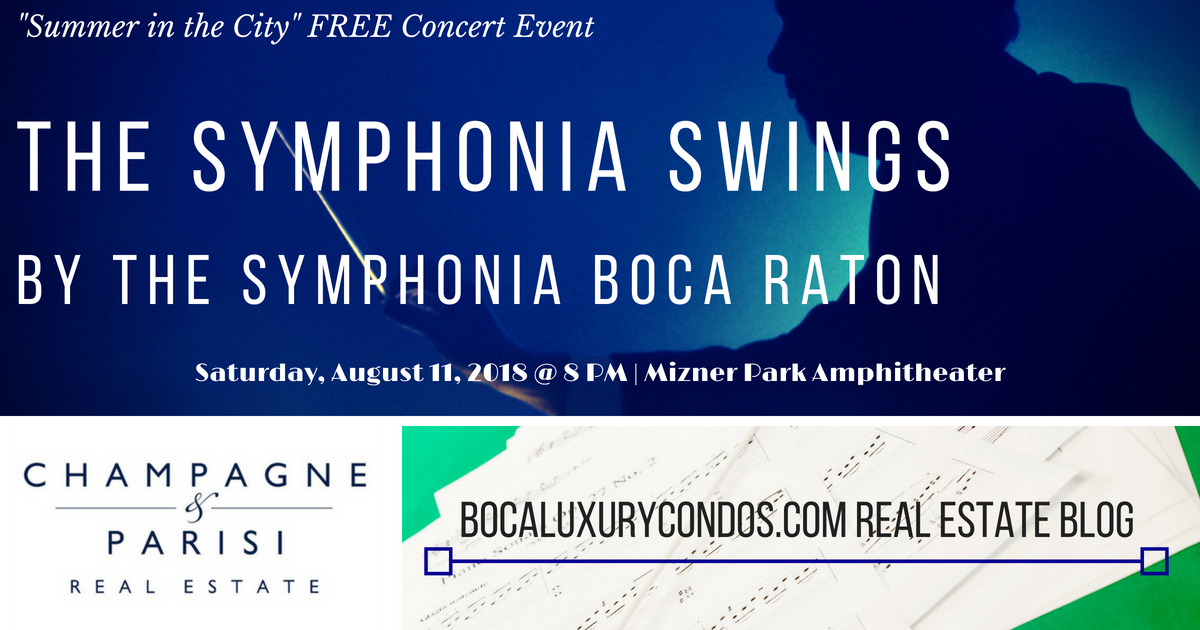 On Saturday, August 11, 2018, the City of Boca Raton will host the final free concert in the “Summer in the City” series at Mizner Park Amphitheater, with a free concert entitled "The Symphonia Swings" by The Symphonia Boca Raton. The Symphonia Boca Raton, now in its 9th season, is a world-class chamber orchestra that is committed to bringing the art & joy of musical presentation to the South Florida community through distinctive musical performances and innovative educational outreach programs. "The Symphonia Swings" promises to be a sizzling performance, as the orchestra plays the classic tunes of some of music's all-time greats, including Frank Sinatra, Dean Martin, Ella Fitzgerald, and many more.

The event, which is FREE and open to the public, will be held at Mizner Park Amphitheater, located at 590 Plaza Real in Downtown Boca Raton, FL. Event attendees are encouraged to walk, bike, or ride-share to the event or to arrive early for the limited free parking which will be available at City Hall and the Boca Raton Library. Attendees may bring blankets or chairs for seating, however, chairs will also be available to rent for $5.00 (cash only) at the event which will take place RAIN or SHINE.

What better way to spend a Saturday night & wind down from Summer than to sit back, relax, and enjoy the music as The Symphonia Boca Raton closes out the city of Boca Raton's "Summer in the City" concert series!? We at ...